I forgot to take any pictures but luckily Tankred of tabletop-hdr.de wrote this great article:

The article is in German but the many pictures might speak for themselves. Inspiring tables, armies and a lot of fun (which we probably can't reproduce digitally, I'm sorry...). You will notice that although it is a LotR based event it is not restricted to this system! It's one of those homely events were people can bring and play anything they want.
Eingestellt von Fin um 1:45 AM 1 comment:

And down down to Goblin-town...

"Slash them! Beat them! Bite them! Gnash them! Take them away to dark holes full of snakes, and never let them see the light again!"
J.R.R.Tolkien, The Hobbit 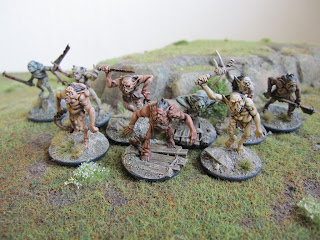 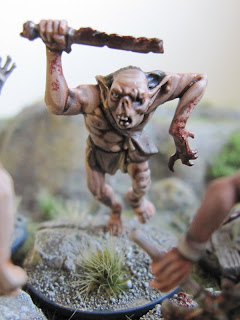 I finished some more of the "Escape from Goblin Town"-goblins. I really enjoyed painting each of them in an "individual" colour scheme. What I wouldn't have believed from the official GW paint jobs: These models have a lot of character!!!

Since most of the miniature is skin they can be finished pretty quickly. Perhaps I should avoid the brighter skintone in the future, but I really liked the ragtag look of these guys. You should always have in mind that these goblins are more like bandits and not a regular army. They shouldn't be uniformed.

One thing I missed in the movie was that Jackson's goblins never seemed to pose a real threat to Thorin's company. I tried to change that by adding some blood to their weapons... They should at least seem like they could deal any damage. Again, I used Tamiya Clear Red for the blood. I really like that stuff although it smells deadly.

The bases were kept simple... Just rocks with some sparse grass. Some of them got some plankwork as a reference to Goblin-town but I didn't went to fancy here. Since the goblin horde will end up rather colourful, I will need the bases as a contrast. 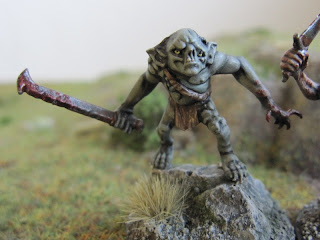 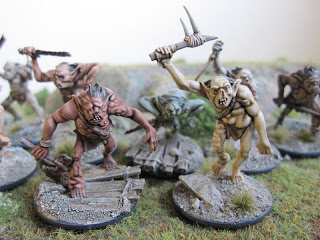 I really hope you like the pictures and maybe I could change your opinion about the new goblin models. They may be some of the best plastic miniatures I had for LotR up to now...

Email ThisBlogThis!Share to TwitterShare to FacebookShare to Pinterest
Labels: Goblins, Middle-earth, The Hobbit

Over Hill and Under Hill

Clap! Snap! the black crack!
Grip, grab! Pinch, nab!
And down down to Goblin-town
You go, my lad!


New year, new project? Yeah, kind of... I was pretty sure I wouldn't withstand the new Hobbit merchandise for too long although I did not like the new Goblin design in "The Hobbit". Nevertheless, HvM's great A Dwarf A Day project talked me into buying the new starter box as well...

Now I'm distracting myself from doing something useful in search of a nice new colour scheme for those nasty goblins. Actually most of the miniatures are really great (if you can live with those un-orcish mutations...). The quality of the cast really surprised me and I'm pretty confident that they could be a great addition for any Middle-earth based LotR, SAGA or Impetus army.

Well, here is what I tried so far. Please excuse the bad quality of the pic. Had to take it with a smartphone... 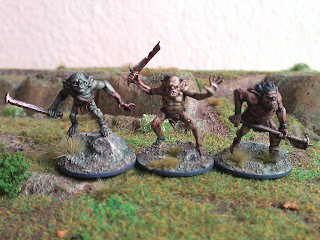