I did some modelling yesterday and some fine young recruits have arrived to bolster the ranks of the Abregado Fusiliers (my Legion Rebels).

All of the miniatures in my second squad are conversions since I want to avoid too many duplicates in my army. For most of the miniatures I simply swapped arms or heads which already added a lot of individuality. You might have to cut away some of the material to make the parts fit and you obviously need to fill in some gaps later on. I'm quite happy that simple conversion techniques work so well. Legion miniatures coming in fixed poses instead of multi part kits was a point of concern for many but even a couple of simple headswaps can take you a long way... 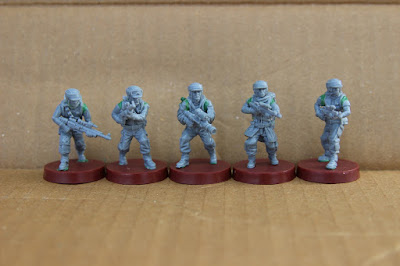 The heavy weapons specialists carry a sidearm on their backpacks. It's a good idea to use some Instant Mold to make a mold of the Ion trooper's E-11 and a add a copy of it to your converted heavy weapons specialists. Since I'm on vacation and just brought minimal tools with me, I just used vegetable oil as a release agent and pressed some Green Stuff on the oiled model. 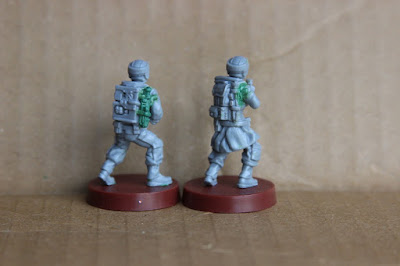 The Z-6 trooper and the squad leader got some more attention because I really wanted my Rebels to have more aliens in their ranks. (You may have noted that the Duros is missing from the troopers. I swapped his head with one of my AT-RT pilots so don't worry. He's still part of this rebellion...) The squad leader was converted into a Mon Calamari by sculpting a custom head and reworking the forearms and hands. I went for a slightly younger looking Mon Cal here mostly to avoid having to sculpt all those wrinkled areas prominent on Ackbar or Raddus. 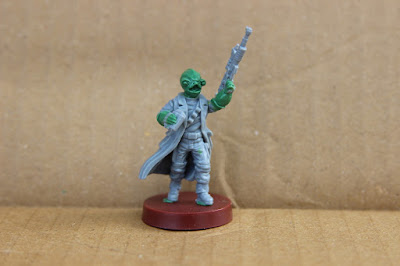 The Z-6 trooper needed even more attention... The Z-6 is a ridiculously oversized weapon and I wanted an alien that didn't only compensate for that in size but also fluff-wise... I guess a peaceful Ithorian was the obvious choice:

"Podrik 'Pod' Cobb was an accountant on Abregado-Rae until he got beaten up by a bunch of drunk Imperial officers in front of a Twi'lek nightclub in Le Yer. He joined the local Rebel cell's medical corps the very next day but soon found out that the distinctive sound of 166 RPS stopped the recurrent dreams of him being tortured by men in Imperial uniforms. His squad mates don't quite trust him..." 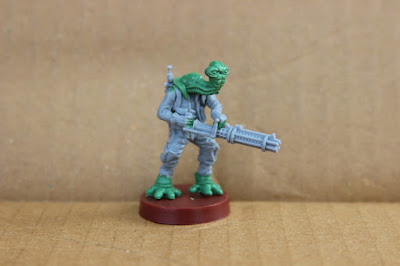 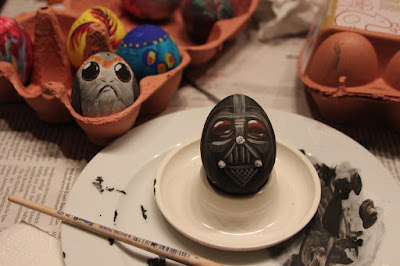 Happy Easter everyone! I put the holidays to good use and finished my first Rebel squad:

Finding a colour scheme is a task of its own as you have to choose between the great looking uniforms seen in canonical appearances and the gnawing urge to create a personal colour scheme. As you can see, I went for a compromise and adapted elements from the Endor strike team and Captain Rex's outfit from season 4 of Rebels ending up with Citadel's Zandri Dust and Vallejo's German Fieldgrey and Luftwaffe Uniform as my main colours. These colours will be find throughout most of my troopers and vehicles. Since I didn't want my Rebel scum to appear to organised I threw in some variant colours too (mainly Vallejo English Uniform and Citadel Tuskgor Fur for the Duros). 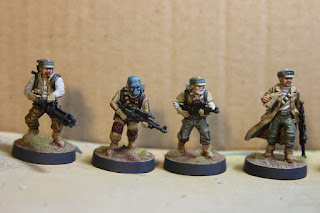 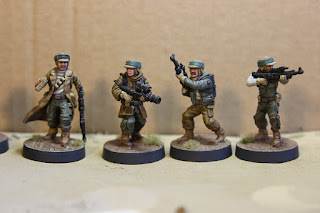 Although Camo is totally canon, I usually have a hard time identifing it with Star Wars. Nevertheless I integrated it into my scheme and I actually quite like it. There are already some very interesting schemes out there that strongly rely on camouflage and look totally awesome. Guess it just depends on the pattern and the dosage... 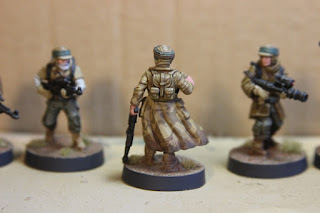