Thanks to Dave from Imperial Terrain, I got my hands on some of their Legion inspired terrain pieces. The moisture vaporators, the tower and the small house are part of the Imperial Terrain desert range. I love the design choices. While still being fairly generic, you can easily spot the Tatooine influences on these pieces, making them great accessories for your Star Wars tables.
Never having been involved with 3D printing myself, these are the first prints I have seen in a very long time. Nevertheless I am very impressed, even more if you have in mind these are mostly prototypes which are not necessarily up to the production standards of the final pieces. 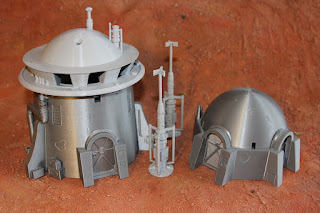 Scalewise, Imperial Terrain is clearly addressed at the slightly larger Legion scale. It still looks great next to WotC or Imperial Assault miniatures. Unfortunately I didn't have my tiny WEG/Grenadier Vader at hand when taking the photos, but I guess his towering 25mm would most definetly look out of scale next to any of these buildings. 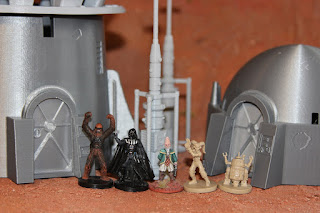 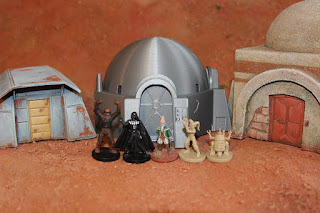 My personal problem with anything 3D printed are of course the printer lines. Although the Imperial Terrain sculpts are very detailed and clean, printer lines probably can't be avoided with current printers. Luckily, the material can easily be sanded down, which I most definetly will try to do on all the "machined" surfaces. I decided to test this on the moisture vaporators first. Both were sanded down and then coated in a mix of PVA glue, filler and water before being sanded down again. After that the surface was smooth enough for my tastes to go on. 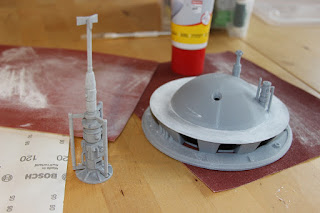 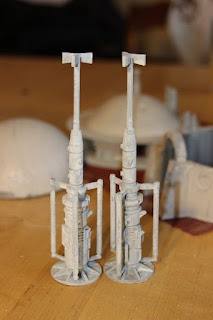 Painting the vaporators was as easy as it can get. White basecoat from a can, followed by a light grey wash (just some watered down grey acrylic paint) and some weathering with red, green and ochre pigments and some Vallejo Black Shade.
I like them a lot and I'm actually thinking about getting more of them. Since they are such a common sight in the Star Wars universe they will look great on any gaming table... 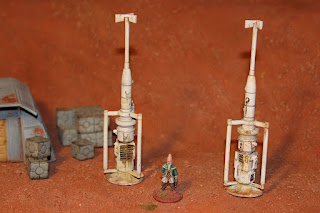 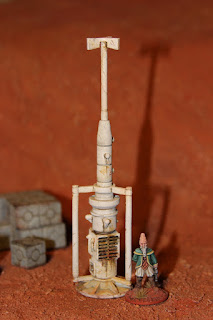 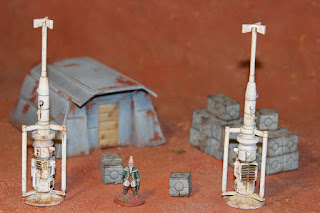