A comprehensive article on the event has been published on tabletop-hdr.de. The article is in German, but more than 150 pictures speak for themselves: Kauzenburg 2012
Eingestellt von Fin um 9:53 AM No comments:

As I feared, most of my pics turned out to be blurred. The Kauzenburg wargaming weekend takes place in the caverns of the Kauzenburg in Bad Kreuznach... People in the Middle Ages didn't spent much thoughts about illuminating their castles to enable miniature photography. Considering that I used a cheap digital camera that can't compete with the high tech equipment of the more talented photographers, I'm still quite pleased with the results.

Frank Becker, one of those more talented photographers has already presented some better pictures of the event in his hobby blog: Figuren und Geschichten
I am sure more will follow. At this point, I will focus on the Impetus presentations at Kauzenburg.

Some of the Impetus Armies at Kauzenburg 2012:


My Personal Highlight at Kauzenburg 2012:

The first battle of my Westerosi. The 100pts contingent, led by Robert Baratheon himself, fought alongside a large 13th century army, led by Count Diedrich of Kleve. Our enemy was another ragtag army composed of Italian sellswords, some unfaithful Lannisters and armed citizens of Frankfurt. I shot a lot of pics, but only a handful turned out good enough to present them here. I hope they can convey some impression of the amazing gaming atmosphere at Kauzenburg.

The Kauzenburg gaming-weekend is over and I am sad to say, that I have taken far less pictures of the gorgeous terrain and miniatures, than I intended to. Instead I mainly focused on my first Impetus battle with my Westerosi, of which I will show some pics soon. In this battle I played a 100 pts battlegroup of a 400 pts army and so, I had to finish another unit beforehand: Skirmishers of House Stark.

Skirmishers belong to my favourite units in Impetus. They are no use if you intend to charge the enemy and deal few to none damage with their ranged weapons, but can be a pain in the ass for your enemy if he wants to weaken your valuable melee troops with bows or crossbows.

The miniatures used here, are a mix of Foundry, Perry Miniatures and Ebob Miniatures and were painted in pale colours, fitting to the Lords of the North. The small banner was not planned from the beginning, but made sense to me because the base had no real eyecatcher... 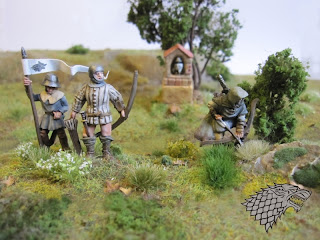 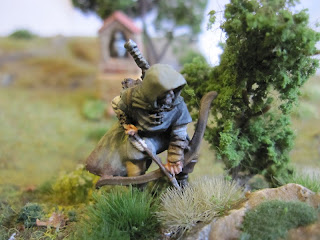 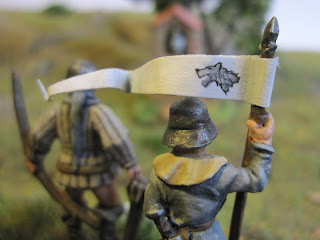 Today starts the annual Kauzenburg Wargaming Weeskend in Bad Kreuzach. My bags are packed and I'm hoping to see some action with my Westerosi. See you there! 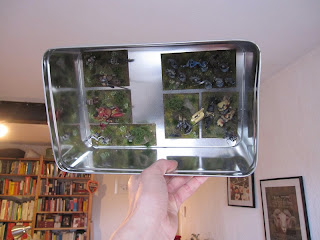 Ours is the Fury!

I have finally painted my version of the Young Stag. I really love the Darksword Version of this character and had to use it although it is slightly taller than the other miniatures I used. The dying horse on the base is a 5th edition Bretonnian horse, the standart bearer is an English heavy cavalry man, sculpted by Ebob. 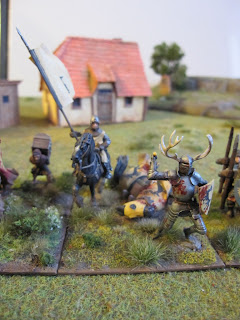 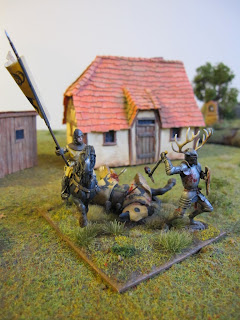 I tried to depict Robert in the heat of the battle. His horse has just been shot beneath him and is kicking in vain while the Usurper is now pushing on on foot. The rider on his right bears his personal standart, the black stag of house Baratheon. 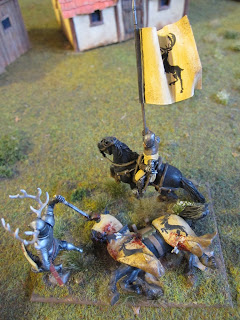 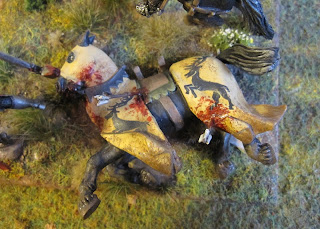 Again, I used Tamyia Clear Red X-27 for the blood splatter. This stuff is really great. The mud on the horse legs was coated with gloss varnish to achieve a wet look. Actually this technique can't convince me yet... I might rework this at a later point.
Eingestellt von Fin um 12:05 AM No comments:

They Have a Cave Troll!

I found some time to paint my copy of the Darksword Gregor Clegane. As I told you, the model itself is way to big to use it alongside "proper" 28mm miniatures. I nevertheless based Ser Gregor the Impetus way.
I chose to use the monster rules of the fantasy expansion of Impetus. This should fit his character pretty well. 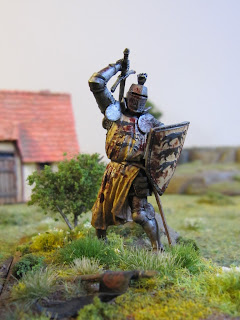 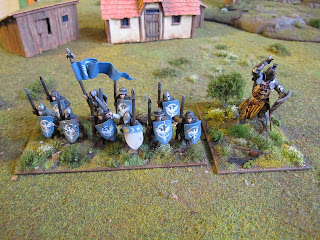 Painting the Mountain was a lot of fun. I used Tamyia Clear Red X-27 for the first time to create blood splatter. I had seen this technique via an article on MassiveVoodoo and was pretty impressed by it. I don't think there is an easier way to get such convincing results. 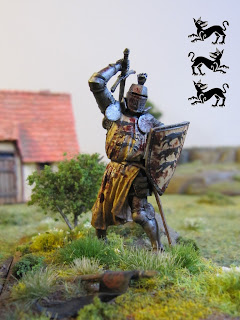 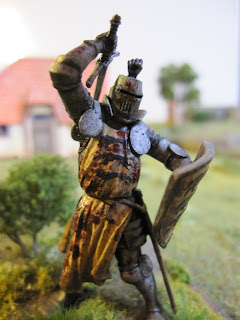 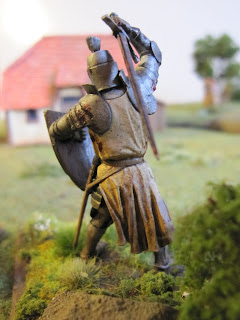