I just foraged my favourite Tolkien artists for inspiration and found this beautiful painting by Ted Nasmith:

I love the scene and the great design of the First Age armament, but I'm still not sure which faction the attackers belong to... Are they men of the House of Haleth, who live in the Forests of Brethil? I never pictured them as that highly developed. Or is it possible that the picture shows an Elvish force? Sindar Elves from Doriath maybe?

Does anybody of you know what Ted Nasmith wanted to display? I searched the web for information on this picture but did'nt find anything?
Eingestellt von Fin um 12:30 AM 2 comments:

Email ThisBlogThis!Share to TwitterShare to FacebookShare to Pinterest
Labels: Middle-earth

Ghosts of the Past

No, it is not the Ghost of Chrismas Past, but some pictures of Elves (and a Bretonnian) I found on my hard drive. As promised, I have searched for a pic of my old High Elves army. What I found, were some well hidden treasures that bear witness to the progress I made in painting and sculpting over the years. Enjoy!


Picture No#1 shows the first miniature I ever painted. It's a Bretonnian archer from the 5th edition Warhammer starter box. Looks quite decent and it probably took me ages to paint it...^^ Unfortunately I can't tell you when exactly I did it. Has to be sometime 1998ish. 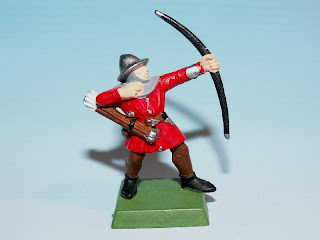 Next are the High Elven captains I told you of. Do you recognise the guy from the drawing?
Back then I used Milliput Super Fine White, an utility knife and a needle for my conversions. Didn't know there were better things to use. Although I would do some changes nowadays, I still like them. Crimson plumes and High Elves definitively fall into place.
The picture is taken in 2004 but I'm quite sure they are older. Late 2002 - early 2003... 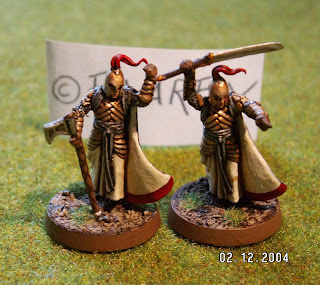 Next one is an Êlnaith, an Elven Knight which was converted from an archer and a Rider of Rohan. It was the last miniature I did for my elven army and I never finished the whole squad I originally planned. As you can see, the sculpting and painting is already much smoother than that of the captains. Nonetheless I wouldn't use my old technique for painting white anymore.^^
The miniature was converted and painted in Summer 2004. 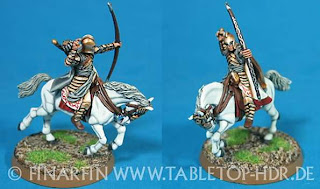 After a longer break I sculpted this female Elven archer in January 2006. I did it after I had some great days on the Kauzenburg convention, a gathering of users of the tabletop-hdr.de forums. I had some great chat with Ebob there and he encouraged me to do some more sculpting, and so I did.
This miniature was supposed to be the first official "FINiature". A company called "Noha Studios" was about to cast it, but unfortunately the miniature broke during the moulding. Nevertheless they managed to make 2 copies of it. One has been painted and was gifted to Ebob, the other one is still with me, but slightly damaged, due to the ruined mould... 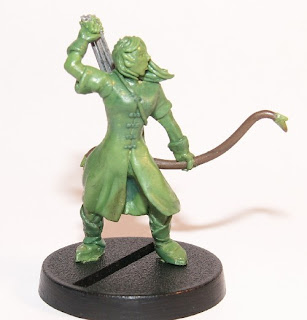 Last Elf I did, was this banner bearer. He was made as a trophy for the winner of Kölns Klamm 2006 (Cologne's Deep), a tournament of the LotR Strategy Battle Game. Although I'm not quite confident with the paint job (the highlighting on the banner is much to strong), I think the sculpt itself was pretty good... I really should have made a copy. 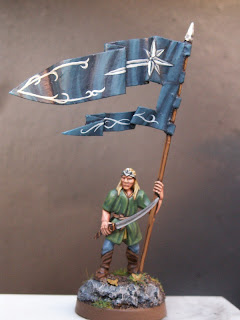 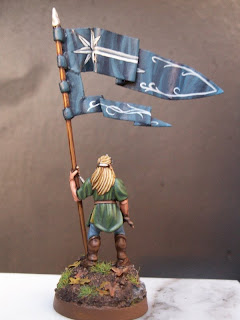 Hope you liked this nostalgic trip to the past although I don't know how someone could benefit from these wooly thoughts. Perhaps I just got carried away...

...and even as the Moon rose above the darkness in the west, Fingolfin let blow his silver trumpets and began his march into Middle-earth, and the shadows of his host went long and black before them.

I love this scene from "The Silmarillion" and it ispired me to sculpt this trumpeter. The High Elves were my very first and still favourite Lord of the Rings army. It's a shame that GW always neglected them. My Elves contained several conversions with sculpted helmet plumes, so I decided to keep this fine tradition. 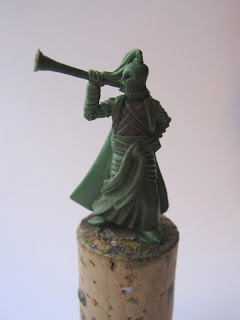 Actually the miniature is to be regarded WIP. It still needs to be sanded and cleaned and I even spot some areas I might have to redo. Hope you like it anyhow, but I couldn't await getting some feedback on it. 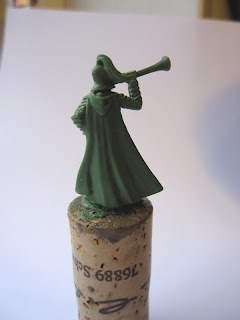 The idea of attaching plumes derived from a drawing I made back in 2001 or 2002. It shows "Finarfin", my RPG character for MERP. I even translated this picture into a miniature (just a conversion, no scratchbuilt) and used it as a captain of the High Elves, but unfortunately I don't have the miniature here to take any pictures.