I ordered some of the awesome Dark Sword Miniatures to see if they would fit in with the miniatures I use.. Although I had already heard that they were slightly taller and a bit more subtle, the result surprised me: 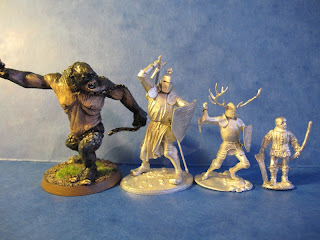 I don't see much problems with the Robert Baratheon miniature, as he is described being some strong young man at the time of the revolution, but the Mountain is just MASSIVE! He looks way taller than the 8 feet that are described in the books. More like 9 or 10...
I'm tempted to base him as a monster for Impetus Fantasy. We'll see.

One of the main problems with Impetus bases is, that they are a bit bulky when carried around. They won't fit in any of the miniature cases I usually use for my single based miniatures.

Therefore I bought some metal-boxes from a certain Swedish furniture store, which are large enough to take even the longest flagpoles. Instead of using rubber foam to upholster the miniatures, I used Tankred's basing method, which he described at the German LotR forums, and bound some 5x2mm magnets to the bases. 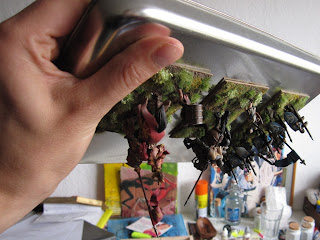 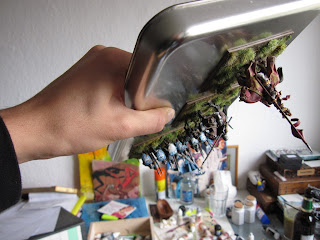 As you can see, 4 of them are strong enough to hold a 12x6cm base with 10 metal miniatures in position, even in most adverse conditions. 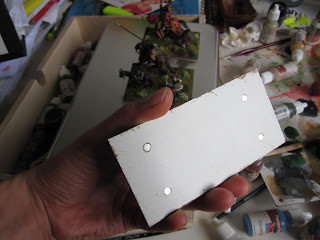 As High as Honour!

Jon Arryn, Lord of the Eyrie and Warden of the East, has rallied his banners to put an end to Targaryen tyranny! Here you can see the elite troops of the Eyrie, Jon Arryn's personal household guard, always accompanying their commander in the vanguard, led by their skilled captain Ser Vardis Egen, offspring of a noble house of the Vale.

These battle-hardened veterans carry the coat of arms of House Arryn. I found two descriptions of the arms:
- "A sky-blue falcon soaring on a white moon, on sky-blue."
- "A white falcon volant and crescent moon on a blue field."
As you can see, I somehow merged these two descriptions and stuck to one of my preferred interpretations of House Arryn's colours as it can be found on the title of one of the German translations of ASoIaF: Das Lied von Eis und Feuer 8: Die dunkle Königin
I like the depiction in the series as well, but the symbol used there is too far from heraldic correctness, even for my purpose.
Ser Egen carries his family's arms: A yellow sun, white crescent moon, and silver star on blue chief above white.

All the models used, are old Bretonnian Men at Arms, sculpted by Alan and Michael Perry. 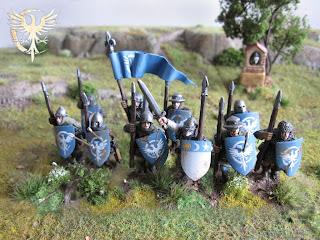 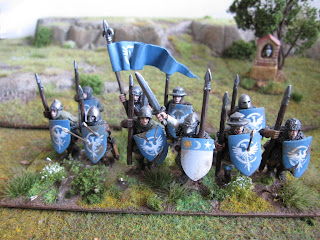 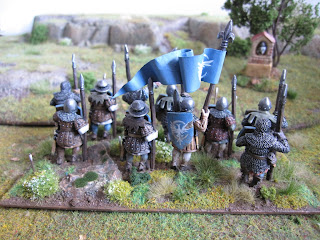 I painted the next Westerosi knight. Some might already have gotten it from the title or recognized the coat of arms (a green shooting star above an elm tree proper on sunset), others (even those who have read the books...) might still be guessing who could be meant. May I present:

Ser Duncan the Tall and his pert squire Egg, sometimes better known as Dunk the Lunk (thick as a castle wall) and, well... those of you who have read the Hedge Knight Novellas of GRRM will know what Egg stands for. I don't want to spoil those who haven't come accross Martin's Ice and Fire short-stories (or the Hedge Knight graphic novels) yet. 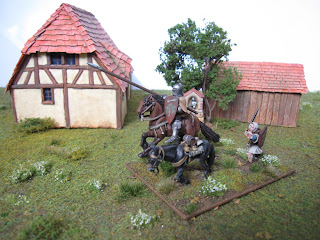 Some thoughts on the model: Well, I don't know what Egg has done, but somehow he has managed to fall off Maester (the mule). Now, he's trying to catch up with him.
Maester on the other hand doesn't care. He's heavily laden with a cask of Arbor Gold and the luggage of Dunk and Egg and quite satisfied being rid some of the weight.
We can't see the face of Ser Duncan cause of the helmet, but it's quite probable that there's a big grin. He just spurs his horse, hoping that Maester will follow him. Egg has kidded him the whole day, so that's what he earns... 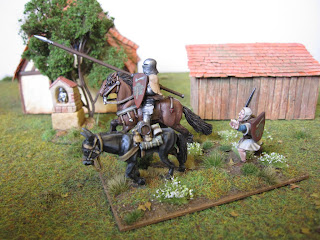 The model used for Ser Duncan is a 5th edition Bretonnian knight, slightly converted. The horse is from Ebob. Way better than the GW ones. The mule Maester started his life being an Ebob pony. I did some minor conversions here as well. Egg is a Foundry model with a plasticcard-shield added. 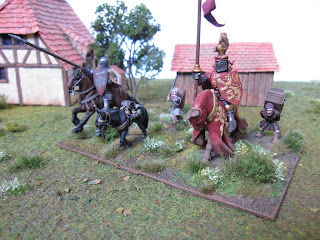 Since all heroes in Impetus are regarded as being mounted (most heroes in Westeros are knights, so this is ok for me...), I decided to base most of my cavalry models on half-width bases. Gaining some interchangability, it will be a nice way to to show the unsteady allegiances of the Westerosi nobility.
I promise there will be more mounted knights on the bases to come... Not less than three miniatures of which at least two are knights seems to be the way to go for me. 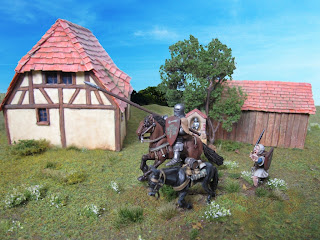 Some Photoshop-voodoo. Sorry guys, but I had to practice...