When thinking about sites of Star Wars ground battles, the Battle of Hoth is definitely the first thing that comes to my mind but the infiltration of the Death Star shield generator on Endor is a close second. Wnhile looking for inspiration for Legion terrain I realized that a lot of the battles to come might take place in or around Imperial facilities and I immediately started looking for easy to copy structures that would sufficiently indicate an Imperial presence on my wargaming table.
One of the first things I came across was the Tarkin Town sheds seen on Rebels. I love the simple yet very characteristic design of these little boxes and I can easily imagine them not only as the prefab slum sheds they're inteded for but next to a larger Imperial bunker as barracks or storage units as well.

Ghostofman from the FFG forums saved me a lot of time with his brilliant papercraft model of this building. If you're looking for atmospheric Legion terrain and don't have the time for complex builds, this is the way to go. For my own build I heavily relied on his model as well but just used it as a blueprint. I rebuilt the whole model from a thick sheet of cardboard and further detailed it by adding all the imprinted panels as physical detail. 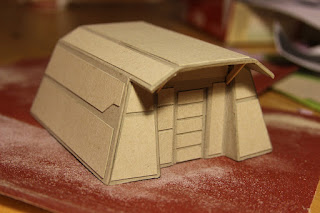 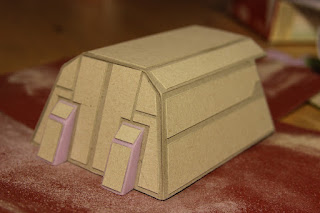 Of course the whole build takes significantly longer than using the ready-to-play papercraft model since the whole thing needs to be painted as well. Nevertheless it's still a very low cost build and the additional attention to detail pays off in the final result. 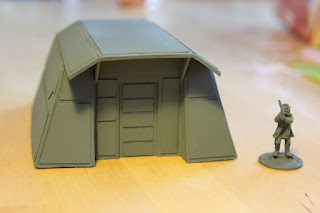 I primed the building using GW's Mechanicus Standard Grey and highlighted the panels by adding a light feather of 50:50 Mechanicus Standard Grey and Celestra Grey. I then lightly drybrused the whole shed with pure Celestra Grey and a 50:50 mix of Celestra Grey and white. The door was painted with Bubonic Brown (Zamesi Desert) which was gradually highlighted by adding white. The rusty spots are a mix of PVA glue and red and ochre pigments which was just dabbed on with an old brush. The runny grime stains were painted by adding some thinned down Scorched Brown (Rhinox Hide) to the mix and painting them on.

And it's done. Doesn't really look like papercraft anymore, does it? 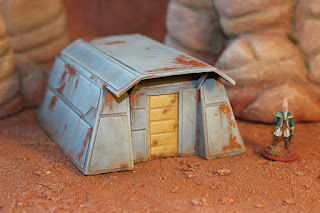 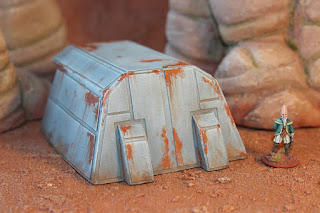 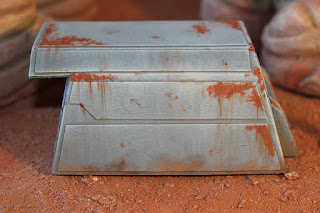 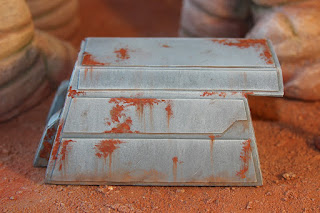 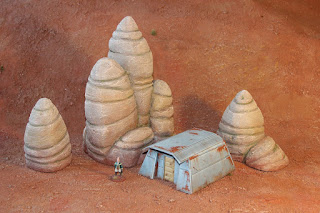